EnterpriseWeb: The Future of Process 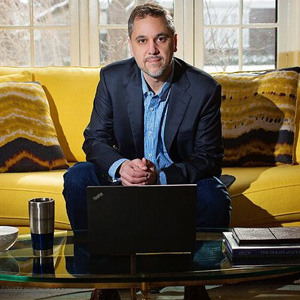 It’s a noble goal as Organizations all across the globe are struggling to connect their operations and value-chains in end-to-end processes. Established IT practices don’t support new requirements for operating in today’s dynamic, distributed and diverse environment. Working across silos, partners, technologies and protocols is hard, and once you've wired everything together, it breaks as soon as requirements change or even a single connected interface changes.

In Greek Mythology, Sisyphus was punished by the Gods to continually roll a rock up-hill. Every time the poor guy got the boulder to the top, it rolled back down and he had to start again.

The arduous work was never finished. He never got more efficient for having done it before. Sound familiar?

In that way, Dave Duggal, Founder of EnterpriseWeb, is your classic entrepreneur. He identified a currently intractable problem and saw a market opportunity.

Dave, who has made a career of growing, turning-around and starting companies, focused on this problem in the late 2000s as he saw the forces of Web and Cloud, and more recently, Internet-of-Things, were driving increasingly complex distributed processes that would not be well supported by conventional middleware stacks. He noted, “We live in a period of accelerating change, it seemed time to re-evaluate assumptions about application architecture.”

As Dave recollects, it was the peak of the “SOA vs REST Wars” and the height of ESB and BPM marketing hype. “It was a strange time to see adult professionals, enterprise architects and system engineers, mocking each other’s views in online chatrooms and blog threads over dogmatic positions on protocols and technologies. They lost sight of the problem in all the bluster.”

Fast forward to today and you can see that many of the same problems exist. Neither SOA nor REST has been a panacea. If anything, the two have come together, albeit somewhat awkwardly, as Service Orientation had to accommodate the popularity of lightweight RESTful APIs. Likewise, Enterprise Service Buses, once praised for enabling SOA, are now condemned as the new ‘monoliths’—too bloated, centralized and rigid—by proponents of Microservices.

Business Process Management technologies never quite achieved the hyped expectation either. The business imperative for ever more efficiency promotes automation across connected systems, devices and machines. While this enhances human decision support and visibility at one-level, it is fundamentally about reducing the scope of human involvement to form inputs, collaboration and oversight. It means that human workflows and data and system integration pipelines must be closely intertwined, adding complexity to today’s middleware stacks. As a result, the glue-ware intended to facilitate interoperability has swollen to the point where it now impedes it.

“There weren’t a lot of people talking about this at the time. For the last 20 years, the solution to every problem in middleware has been to add more middleware,” Dave stated wryly. “I read hundreds of academic and industry papers, went to conferences, spoke to analysts, etc. Everyone seemed myopic—focused on individual components without considering the accidental complexity of the overall architectures they were prescribing. ”Dave did stumble on one 2008 article, “Dynamic, Context- Informed Workflow” that stuck out; “It looked at process from a fresh perspective, based on Computer Science ‘first principles’.”So he reached out to the material contributor, William Malyk, then studying high-level programming in the PhD program at University of Waterloo, and offered him an opportunity to “change the world” (seriously, no joke).

So Bill the whiz kid and Dave the intrepid entrepreneur set out to re-invent the middle-tier for the 21st Century.

A Platform for Transformation

They developed, from the ground up, a new type of application platform—RESTful, horizontally architected, elastically scalable and multi-tenant. Instead of wiring together discrete middleware components as everyone had done before them, they rendered middleware functionality as dynamically realized services. Their platform acts as lightweight glue and a runtime for composing diverse and distributed endpoints into highly modular, dynamic and adaptable business solutions.

The Platform, also called EnterpriseWeb, provides a unified approach to Cloud, IoT, System and DevOps automation, as well as dynamic human workflows in a 15mb footprint with few requirements (Servlet container, SQL or NoSQL DB of choice). It eliminates the requirement for licensing, deploying and maintaining stack environments and enables organizations to rationalize their IT operations.

EnterpriseWeb is deployed in production in a variety of domains on four continents. The IP-based Company with multiple awarded US patents goes to market through partners. The boot-strapped NY-based Company, with no sales or marketing team, is methodically building a global network of Consulting firms, System Integrators, Tech Firms and Independent Software Vendors to deliver highly-differentiated solutions around the world.

At first glance, EnterpriseWeb may look and behave like an Enterprise-class Content Management System. It provides a universal interface to a logical store for working with unstructured, semi-structured and structured information that may reside locally or be persisted in federated databases or distributed systems. The RESTful platform uses URIs as an address space for all of these endpoints.

All content is dynamically curated; indexing and tagging is automated. All content can be searched and navigated from one location. The Platform provides log-style time-series persistence capturing the use and change history of all content as metadata.

On top of logical access, EnterpriseWeb layers an abstraction; all the endpoints are represented as Graph Objects. Each graph object is a rich entity, which declaratively models its dependencies as metadata and link references, which is exposed through a universal interface as “Dynamic APIs”. Dynamic APIs represent EnterpriseWeb’s model-driven approach to interoperability and API evolution (note: EnterpriseWeb is promoting a standard by the same name – http://blog.iicon-sortium.org/2015/09/dynamic-apis-negotiating-change.html). The Platform expands that model by allowing code to be co-located and accessed via the same logical store and object model—think GitHub meets the Data Lake. This is where things start to get really interesting, as the design supports a common way of dealing with diverse and distributed endpoints of any type. 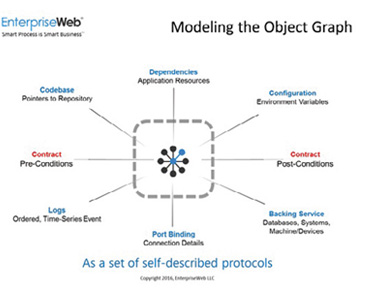 EnterpriseWeb provides a rich modeling environment for composing Organization models, Information Models, Application Models and Process Models all-in-one, all based on linking objects with metadata and link references into higher-level objects. The development and connection of objects is model-driven using System Primitives and an extensible Type System. There is no build or compile. Nothing is tightly-coupled. Everything is logically modeled and dynamically interpreted with extreme late-binding.

Since all interactions are dynamic, objects are provisioned and configured on-demand based on run-time context. The Company claims that applications can co-evolve with their constituent Objects, which can be updated, upgraded or replaced without breaking the model or any running instances.

In EnterpriseWeb, a Process is a set of Task/Activity objects. Each Task is a loosely-coupled model with a logical control flow. Tasks may include references to a set of operations exposed via APIs. Each Task is a dynamically realized service that can provide both a personalized user-experience and an optimized transaction. At run-time EnterpriseWeb takes interaction metadata as inputs for policies and functions, to dynamically interpret each Task, along with available next steps (optional and/or required). Note: Processes can include any combination of Orchestration, Choreography and Collaboration Task/Activity types.

The Process is not statically encoded in a flowchart at design-time, but rather it emerges from a series of asynchronous interactions at run-time. In this way, EnterpriseWeb supports an event-driven Process, which can be as flexible as possible, as procedural as necessary. While each instance of a Process has its own custom path from start to end, Process state can still be tracked and traced, monitored and reported.

“The Future is here, it’s just not Evenly Distributed”

While early on naysayers told them they were “boiling the ocean”, they are now looking increasingly prescient. It’s hard not to marvel at the breadth and depth of what a small team has accomplished; on their own with no venture capital. While many organizations inevitably take a wait and see approach to transformation generally, in today’s fast changing competitive landscape they do that at their own risk. Any aspiring digital business should take a close look at EnterpriseWeb. 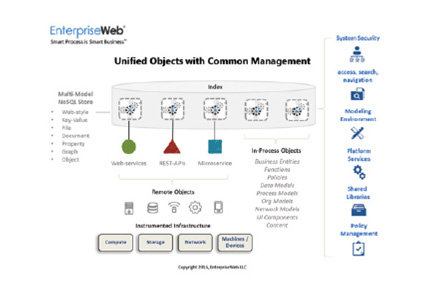